The Sports Domain…. Where (fill in the blank) happens.

I have reached that point as a MSU fan where losing close games we should win do not even bother me anymore. After last night’s game where I saw MSU lose a seven-point lead in a span of two minutes and melt in overtime, I stayed calm and content. After losses like that, I am usually sulking for about an hour. Officiating was horrible, and I was not yelling at the TV like I used to. I put the loss behind me before the game was officially over. What pissed me off more than anything was the action of a few fans in attendance. I understand the frustrations with the officials, but why would you embarrass your university…MY alma mater…on primetime national TV? Everything was set up perfectly to be a good night: record crowd, people actually wearing the shirts provided, the no. 2 team in the nation coming to town and an outstanding game. And all that gets overshadowed because a few drunken frat boys want to throw cups and bottles onto the floor. The thousands of phone calls and texts DeMarcus Cousins received from our fans gives us another black eye. One of the biggest games in recent MSU history, and idiotic fans want to make themselves bigger than the game they were not even playing. 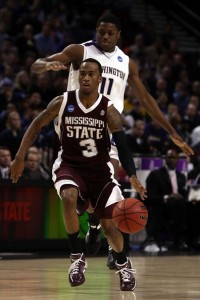 Dee Bost led the Bulldog attack with 22 points, 5 rebounds and 3 assists in the overtime loss to Kentucky.

Now that I’m off my soap box, the Kentucky game was a big must-win for the Bulldogs, and they lost it. They needed this win to improve a lackluster tournament resume. MSU has an RPI of 62 and can’t afford anymore bad losses the rest of the way if they want the NCAA Selection Committee to even bat an eye at them. MSU received the worst compliment any team could receive. Scoop Jackson called MSU a team that plays up (or down) to its competition. It is definitely hard to argue that fact. After eight losses, only one of them is by double-digit points. That one loss was a season-opening game against Rider, a team MSU refused to take seriously. Every other game either won or lost by less than 10 points were either won or lost in the final two minutes. If MSU wants to make a serious run at getting back on the bubble, they have to win out and beat at least one of the big three of the east in the SEC tourney. With the loss, MSU drops into second place in the west. They can still win the west because Arkansas has a tougher finishing schedule. They have Vandy, at Tennessee and Ole Miss left, and MSU has to go to South Carolina and a season finale at home against Tennessee. MSU’s NCAA tourney lives are in their hands at this point. The Bulldogs had their gut-check moment last season after a home loss to Auburn. Then they won out in the regular season and rode the momentum to a SEC tourney crown. Will they use this loss as a wake-up call? They have to. The leading scorer Ravern Johnson did not play. Jarvis Varnado was ineffective due to foul trouble. Even with all that going against them, they still take the country’s second-ranked team to overtime. There are no more excuses for this team from this point on. I’m trying to stay hopeful for the Dawgs, but anymore losses could give them a number-one seed, in the NIT.

This Week in Mississippi State Basketball

Outside of Rupp Arena, Vandy’s Memorial Gymnasium is the toughest place to play in the SEC. The design and the benches being on the baselines seem to rattle teams. The fact that Vanderbilt is usually unbeatable complicates things for opposing teams. Vandy has lost only four games at home dating back to the 2007-08 season. MSU had a chance to win in Nashville in that ’08 season, but Shan Foster decided to go into sniper mode and shoot the cover off the ball. I said earlier MSU would win at Vandy, and I still think they will. The shooters are coming out of a slump somewhat. The three is not falling as frequent as it has in earlier games this season, but with as many as they take they will make enough to stay in the game.

The key for success, as always for the Bulldogs, is to keep turnovers to a minimum. In four of State’s five losses, they have lost the turnover battle. Jarvis Varnado has to put in more work than usual against Vandy, banging against 6-foot-11, 250 pound A.J. Ogilvy and his 6-11, 255 pound backup Festus Ezeli. Varnado has been able to contain Ogilvy in past match-ups, and neither Ogilvy nor Ezeli will be dominant factors if Varnado can stay out of foul trouble. Stansbury has been playing Kodi Augustus at center for a little bit trying to give Varnado some rest. Varnado is averaging 30 minutes-per-game and has logged over 32 minutes in every conference game. Barry Stewart will defend John Jenkins or Jeffrey Taylor, both averaging over 10 PPG. Stewart has done a great job defending the other team’s go-to guards this season.

Just like Mississippi State, Florida has been hard to figure out this season. The Gators have the marquee win over Michigan State at a neutral site, but needed a hail mary to beat a North Carolina State team that is near the bottom of the ACC and lost to South Alabama at home and Richmond. I said MSU would lose to Florida, but it depends on which MSU team decides to show up to the O’Connell Center. Florida’s three SEC losses are from teams ahead of them in the standings: Vanderbilt, Kentucky, and Tennessee. Their wins are against Arkansas, Georgia, South Carolina and LSU, teams MSU has beaten at least once with the exception of South Carolina. So if MSU plays like the team it is fully capable of, winning this game should not be an issue. But if the Dogs cannot put together the complete effort: shooting, defense, rebounding, and more importantly not letting one player take over a game, expect a loss to the Gators.

The Gators are led by two outstanding young guards, Erving Walker and Kenny Boynton. Boynton leads the team in scoring and is second in assists. Walker is second in scoring and first in assists. They have length inside with Alex Tyus and Chandler Parsons.  Augustus is the best player on the team when he is on his game, but Ravern Johnson is built to pose a match-up problem for Florida. He can shoot over the short guards and can put the ball on the floor past the taller but slower forwards. He’s been in a three-point shooting slump as of late, but he has found other ways to score. His added versatility makes him that much harder to defend, especially when he is hot from behind the arc. Varnado is always going to find a way to get his points, whether it is from the free throw line, grabbing loose rebounds or having an efficient post offense. MSU needs more quality wins if they are to make Selection Sunday a little less nerve racking. This week is the perfect week to do that.

What Am I Saying?